Posted by admin on Oct 29, 2014 in Featured Artists and Inspirations

The photos and information below came from Arch One – College of Architecture. The original post may be seen here. 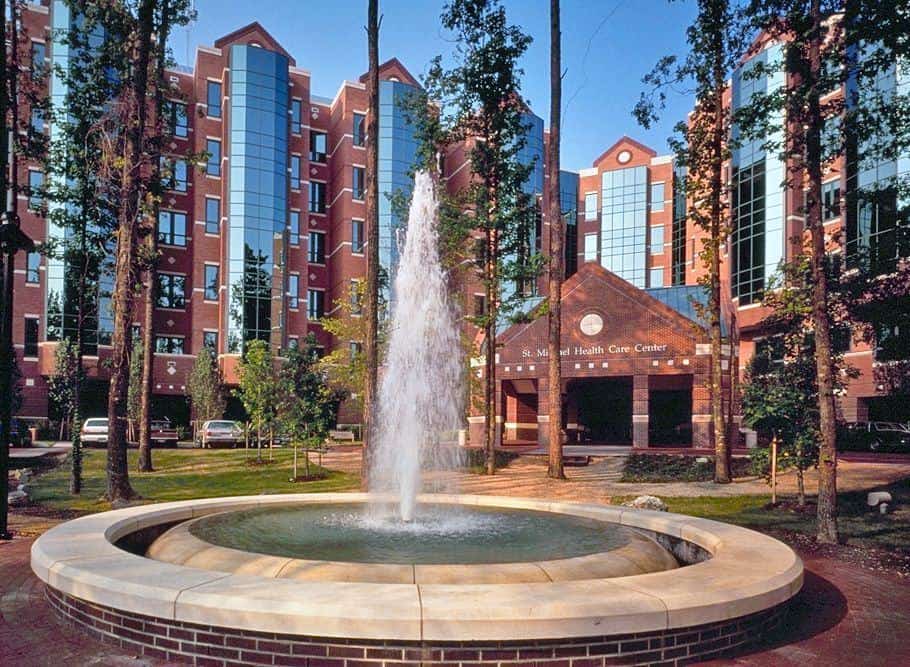 A patient-centered design at Christus St. Michael Hospital in Texarkana, Texas earned the 20-year old hospital the 8th slot in a ranking of the most beautiful hospitals in the United States. The hospital was designed by a team led by Kirk Hamilton, now the associate director of Texas A&M’s Center for Health Systems & Design.

The annual rankings were determined in an online election hosted by Soliant Health, an Atlanta-based healthcare staffing company.

In the early 90s, Hamilton, co-founding principal of the architecture firm Watkins Hamilton Ross, was the senior designer in a project for the Sisters of Charity Health Care System, which sought to renovate a hospital they operated in Texarkana.

“Renovating the old building was going to cost a fortune and not give the hospital any additional capacity,” said Hamilton. “After four feasibility studies, the client said ‘we really ought to consider a new building.’”

Hamilton and his team, which included firm partner David Watkins and landscape architect James Burnett, made the patient the primary focus of their efforts.

“In my hospital designs I was an advocate for patients, experiencing a very difficult time in their lives, who didn’t have a seat at the design table,” he said. “I worked hard to try to make hospitals that were less frightening, that connected patients to nature and were something other than highly institutional, dark and dreary places.”

Hamilton relied on groundbreaking research by Roger Ulrich, who showed in a landmark 1984 study that patients with views of nature, as opposed to buildings, recovered faster, received fewer negative evaluations from nurses and received fewer moderate-to-strong doses of analgesics. Ulrich was a member of the Texas A&M architecture faculty from 1988 – 2011.

“We were thinking about Ulrich’s work when we designed St. Michael’s,” said Hamilton. “The hospital was purposefully built in the trees, and all patient rooms are looking into a forest.”

He also sought to create a simplified hospital interior that would be less confusing and intimidating for patients than the era’s existing healthcare facilities.

It was typical at the time, he said, for a patient to be treated in cardiology in one part of the building, in another area for nuclear medicine, then in other areas for different treatments. “Patients were getting ping-ponged around difficult to navigate, complex buildings,” he said.

Hamilton’s design placed patient services on two floors, each with a single entry point: one floor with diagnostic services, and another with surgery, cardiac catheterization, ambulatory facilities and all other hospital services.

“The design was innovative for its time, and turned out to be a great success,” said Hamilton. “The new St. Michael’s attracted new patients and enjoyed an increased market share, while its competitor had a decreased market share. I continue to use aspects of the building when I’m teaching typologies of contemporary hospital design, so some of the lessons learned at St. Michael’s continue to be valid today.”

St. Michaels is just one of the many patient-centered medical facilities Hamilton designed during his 30-year career as a practicing architect that have made a difference in many thousands of patients’ lives.

“At any one time, there are 12,000 patients in rooms that I’ve designed,” he said. “I’ll never meet the thousands of people that hopefully had a positive healthcare experience, but I feel like I’ve made a contribution to a good thing.”

Hamilton who joined the Texas A&M faculty in 2004, teaches his students about evidence-based design and the relationship of facility design to organizational performance.